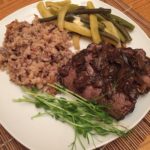 Braised Roast Beef in a Cinnamon-Orange Coffee Sauce
This recipe is warm and comforting, and contains not only grassfed beef roast, but also honey! We think buckwheat honey adds the best flavour, if you have it. This would be a fantastic recipe to serve during the holiday season - the flavours lend well to the Winter-yule-vibe. Adapted from "Free Range Farm Girl: Cooking Grassfed Beef" by Shannon Hayes
Ingredients
Servings: people
Instructions
Recipe Notes